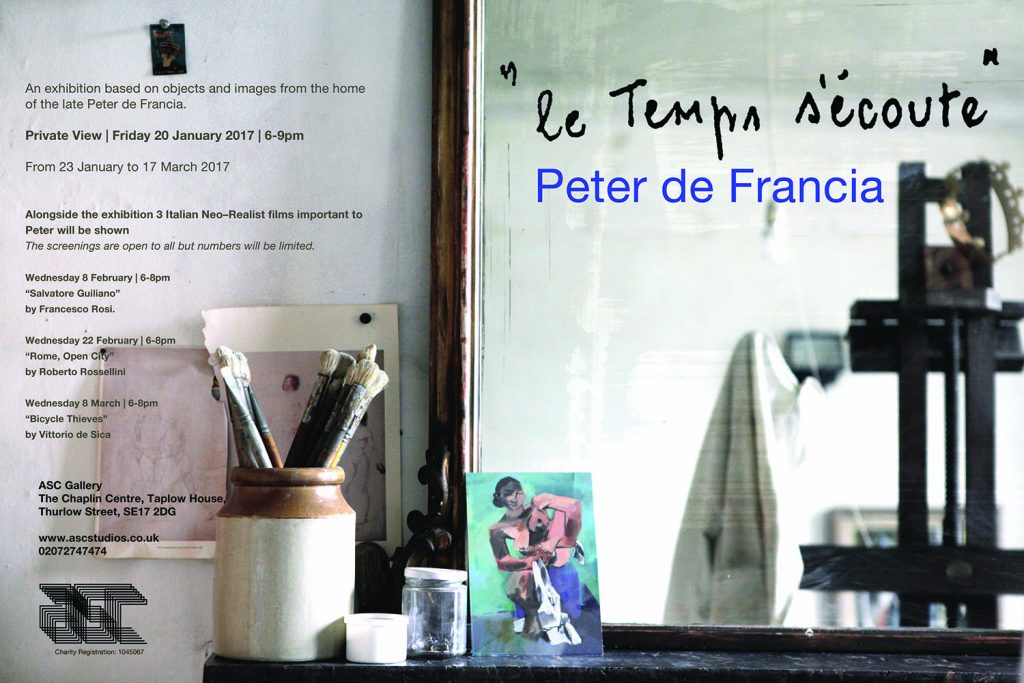 In the month when Peter de Francia would have turned 96, five years after his death, ASC Gallery is proud to present an exhibition to celebrate his life and work.

Its title, ‘Le temps s’écoute’, refers to a quotation he kept pinned above his writing table. Its origin is uncertain: the literal translation, “time listens to itself”, does not convey its full meaning, which echoes in the imagination.

For over 50 years until his death a few days before his 91st birthday, de Francia lived and worked a few hundred yards from the ASC Gallery’s present site in Thurlow Street. In his house, room for drawing and painting took precedence; he had no interest in mod cons, and enjoyed a simple style of life.

The focus of the exhibition is not primarily on the artist’s work, but on the objects and images that surrounded him at home: photographs from magazines and newspapers, Indian wind-up toys, mementoes of his beloved Provence. There is a playfulness and humour in the juxtaposition of image and object, visual puns in the image of a rotund belly echoed by the curve of a clay pot, or the dialogue between the proud sweep of the spout of a jug and a surging uniformed paunch. Only occasionally is there a direct reference to his own work, but every object speaks of him, and conveys a strong sense of the artist’s personality.

The blue ground of the exhibition’s display cabinets alludes to de Francia’s bleu de travail, the blue cotton French worker’s jacket and trousers that he often wore. A friend tells the story that he was once accosted by an old lady at the Gare St Lazare, who mistook him for a porter, and demanded he carry her luggage. He complied, of course.

Born and brought up in France, an art student in Belgium, living for a time in Rome, de Francia was an intellectual in the French sense, profoundly European “cosmopolitan by conviction”, to quote Dore Ashton. He exhibited widely, not only in the UK and Europe but also in the United States and India.(His portraits of the 50s and 60s present a wide-ranging array of figures, across disciplines, such as the historian Eric Hobsbawm, the composer Alexander Goehr, the scientist J. D. Bernal, and the Italian poet Salvatore Quasimodo.)

Throughout his life de Francia was committed to the figurative language of painting, at a time when abstraction and conceptual art were in the ascendant, and figuration had become deeply unfashionable. “Art for art’s sake” was not what interested him; his subject was the human condition, in all its aspects: the horrors of bombings, massacres, executions, the plight of migrants, the abuse of power, alongside the tenderness and intimacy of human relationships. In later years, he turned to metaphor, allegory and myth.

He was an influential teacher, at St Martin’s School of Art, as Head of Fine Art at Goldsmiths, and finally as Professor of Painting at the Royal College of Art, from 1972 to 1986.

Peter de Francia’s work is included in the collections of the Tate, (two drawings are currently on display in the exhibition “Citizens and States” at Tate Modern), MOMA, the British Museum, the Victoria and Albert Museum, the Scottish National Gallery of Modern Art, among others. The estate of Peter de Francia is represented by James Hyman Fine Art.

Darren O’Brien was a student at Winchester School of Art when he first encountered Peter, who had been invited to give tutorials to the BA students. Darren is a painter, and co-director of the ASC Gallery.

Christina Niederberger has been living in the upstairs flat of Peter’s house since 1995. She is a painter and has a studio with ASC in the Chaplin Centre.

Alix MacSweeney was Peter’s wife. She is a painter, with a studio at APT in Deptford.

ASC Gallery would like to thank: The Cuming Museum, The Horniman Museum, The Geffrye Museum and The Brooklands Museum for their support and loan of the exhibtion displaycases.